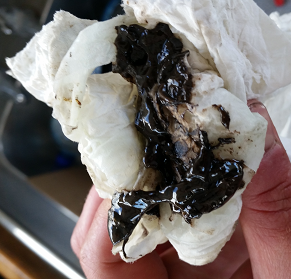 Is all sludge Diesel Bug?

So you’ve found black sludge in you fuel separator?….Diesel Bug!!...That’s the number 1 reaction…But is all sludge Diesel Bug??

So you’ve found black sludge in you fuel separator?….Diesel Bug!!...That’s the number 1  reaction… ……But is all sludge Diesel Bug??

That sludgy black mess on the bottom of the tank and in your filters can be any of or a combination of the following:

Know this… and you’ll know why all the oil majors are united in recommending modern diesel should not be stored longer than 6 months…modern diesel is no longer a “straight run product” from a distillation tower.

Crude oil goes through so many processes to produce the ultralow sulphur finished product we have today, in short, it is refined and processed to within an inch of it’s life….it’s unstable, degrades rapidly and leaves deposits, everywhere, including the injectors!....had any early injector failures?

The journey of diesel from the refinery/blending to you, the end user, can take easily 2 months as it is bought and sold and transferred from one tank to another as much as 7+ times. We often hear…. “We only by from our one good supplier”…. Good….but how many of their suppliers up the chain were good??..

But no matter what your industry, Marine,  Agriculture, Mining… if you store diesel, for any length of time, you need to maintain it like you maintain your engine.

o  From the minute diesel is made it is decaying…remember this is a hydrocarbon…. It readily degrades in aerobic conditions.

o  As much as 50% of fuel flowing from the tank to the engine is used to cool the injectors and returned to the tank. Imagine just one molecule of diesel, subject to all that heat and pressure, can make that journey many, many, times before it is injected and burnt. Diesel is not designed to be used as a cooling medium. Cooling Oil is laced with thermal stability additives designed for this. Diesel is left to fend for itself and thermal degradation soon follows.

o  The Free water, that’s the water lying on the bottom, creates a very mild acidic layer in the interface between the water and the fuel above which accelerates degradation.

o  More for, but not limited too, marine….. Buying fuel derived from different base stocks and mixing them can very quickly end in tears. In my deep sea shipping days there was a head office directive that new fuel (bunkers) should never be mixed with fuel already on board. Not always possible of course but the potential of immiscibility was ever present and the consequences very serious. Those directives are more  important now than they ever were.

o  So having removed all the sulphur, making the fuel unstable, the environmental lobby then called for a sustainable fuel too. Along came FAME from Rape Seed, Soya, Palm oil etc….and not forgetting your local takeaway and chippy. This stuff is hygroscopic…..it literally sucks water from the atmosphere, it degrades quickly and it leaves deposits. It is not as regulated as well as it should be and If it is not processed properly you can find it’s by product Glycerol, a waxy soap washing about in your tank and you filter……The worst of it is they chop down rain forests to grow it!…how can that be environmentally friendly?...but that’s another story..

o  This speaks for itself and it all ends up on the bottom of the tank.

o  This is probably the greatest single contaminant of them all and the presence of which is the precursor to 90% of problems…..yetis the easiest to remove. Just open the drain plug and let it out on a regular basis…If you don’t have a drain get a Diesel Dipper® This will suck off the very bottom of your tank whilst you are underway and the tank is sloshing about, everything on the bottom of the tank will eventually be sucked up…..it is the “bilge pump for diesel tanks”. If you have a filter/separator already…good…. that is protecting the engine. However It’s doing nothing to stop the problem happening as that sucks from about 20mm above the bottom of the tank. It’s on the bottom where the problem is. The Diesel Dipper is independent of the engine and has it’s own pump. It is a tank purifier.

o  You have a black smear on the bottom of your tank? Or black bits in the filter bowl? Likely as anything this is Asphaltenes. Asphaltenes have always been present in fuel and held in suspension by the aromatic compounds of the fuel. Removing the sulphur also removed these aromatic compounds so as the molecules of fuel continue their journey too and from the engine they become unstable and agglomerate then inevitably fall to the bottom of the tank.

Asphaltenes are Hard and Sticky unlike ……….. Diesel Bug

o  ……….Soft and slimy and can only exist in your tank because you have water. Remember this…No water no Diesel Bug!.....You have to remove the water from the drain plug or use a Diesel Dipper® then kill it with a Biocide. Our biocide Diesel Bug Treatment(DBT) has engine manufacturer approval and will it kill all Diesel Bug.

Never use an additive that removes water from the fuel. They will remove the water… by absorbing it into the fuel….which then goes to the engine. That was acceptable on engines 20+ years ago. A modern diesel cannot tolerate any water in any form. Worse….. the additive can only absorb a maximum quantity and if not a biocide does not kill Diesel Bug so the problem remains.

So what can be done?...prevention is better than cure. Diesel Bug and Asphaltenes cannot be reabsorbed into the fuel, they have to be removed mechanically via the drain plug or use the Diesel Dipper which also ensures any sludge behind the tank baffles is removed. Running continuously, it scours the bottom of the tank as the sludge eventually comes to the pump…..rather than the pump going to the sludge.

……..add a proven additive blended specifically for the job..

·       It adds stability to the fuel to help stop the thermal/oxidative degradation and helps keep the asphaltenes in suspension.

·       It demulsifies the fuel to help remove the water.

·       It increases the cetane number for better ignition and improved fuel consumption.

·       It adds a lubricant to the fuel, modern diesel lacks inherent lubricant.

·       It has a detergent to clean and prevent deposits settling on components leading to smoking engines, difficult starting and increased fuel consumption.

·       It contains a biocide to kill Diesel Bug before it can grow.

·       Add Diesel Bug Treatment DBT to kill all Diesel Bug. This is done once only.

Peter Weide Co Director of Marine 16 was a deep-sea Chief Engineer, Regional Manager for Mobil Oil Marine lubricants, Ship Repair yard Director and latterly Head of service sales in marine engine manufacturer Wärtsilä. Identifying there was nothing available on the market to remove water from the very bottom of tanks, he designed and received in 2020 a patent for the Diesel Dipper®.

Marine 16 products were developed exclusively for the leisure boating and light commercial sectors.  We make it easy for you to maintain your vessel, inside and out.